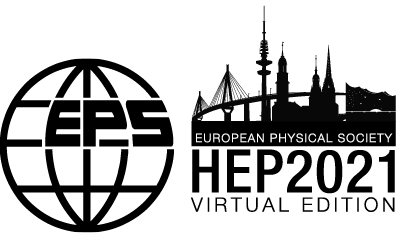 The European Physical Society Conference on High Energy Physics (EPS-HEP) is one of the major international conferences that reviews the field every second year since 1971 and is organised by the High Energy and Particle Physics Divison of the European Physical Society. The latest conferences in this series were held in Ghent, Venice, Vienna, Stockholm, Grenoble, Krakow, Manchester, Lisbon, Aachen

The 2021 European Physical Society conference for high energy physics will follow a purely online format. The organisation of the conference has been hosted jointly by Universität Hamburg and by the research center DESY. The conference will feature plenary, review and parallel sessions covering all major areas and developments in high energy and particle physics, astroparticle physics, neutrino physics and related areas.

The European Physical Society Conference on High Energy Physics (EPS-HEP) is one of the major international conferences that reviews the field every second year since 1971 organized by the High Energy and Particle Physics Division of the European Physical Society. The latest conferences in this series were held in Venice, Vienna, Stockholm, Grenoble, Krakow, Manchester, Lisbon and Aachen.

In 2019 the EPS-HEP conference will take place in Ghent, Belgium from 10 to 17 July. The 2019 conference is organized by the Department of Physics and Astronomy of Ghent University in collaboration with Universiteit Antwerpen, Vrije Universiteit Brussel, Universite Libre de Bruxelles and Universite Catholique de Louvain. The conference will review latest results in Astroparticle Physics and Gravitational Waves, Cosmology, Neutrinos and Dark Matter, Flavour and CP Violation, Standard Model and Beyond, Electroweak Symmetry Breaking, Quantum Field and String Theory, QCD and Heavy Ions, Accelerators and Detectors, Outreach, Education and Diversity

The European Physical Society Conference on High Energy Physics (EPS-HEP) is one of the major international conferences that review the field. It takes place every other year since 1971. It is organized by the High Energy and Particle Physics Division of the European Physical Society in cooperation with an appointed European Local Institute of Research or an internationally recognized University or Academy Body.

EPS-HEP 2017 was held on 5-12 July in Venice, Italy at Palazzo del Cinema and Palazzo del Casinò, located in the Lido island. The conference has been organized by the Istituto Nazionale di Fisica Nucleare (INFN) and by the Department of Physics and Astronomy of the University of Padova. 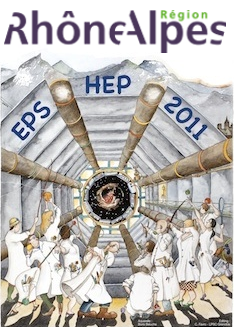 XXIst International Europhysics Conference on High Energy Physics
EPS-HEP2011 21-27 July 2011 Grenoble, Rhône-Alpes France
EPS-HEP is one of the major international conferences that review every second year the state of our knowledge of the fundamental constituents of matter and their interactions. Approximately 750 physicists from all continents gathered in 2011 to present and discuss their latest findings. For a full week, results obtained in terrestrial laboratories or through observations of the Universe were confronted with the most recent theoretical developments. Advances in particle detection and in acceleration techniques were also presented. EPS-HEP 2011 was the first major world conference after extensive operation of the CERN Large Hadron Collider (LHC) at an energy of 7 TeV, and one of the last scientific events before the final shutdown of the Tevatron collider scheduled in September 2011. Reports of new and potentially exciting observations made at LHC, at other international laboratories and from programs in astroparticle physics and cosmology were made. With eleven parallel sessions and an extended poster display, almost five hundred oral and written contributions were given. On July 23rd, the conference also hosted the traditional joint ECFA-EPS open session that served as the kick-off meeting for the update of the European Strategy in High Energy Physics. The conference was held in Grenoble, France, in the Rhône-Alpes region. This region is the home of several major research centers in fundamental and applied scientific research as well as a large and active high-energy physics community. Seven regional laboratories (LPSC, IPAG, ILL, IPNL , LAPP, LAPTh, Institut Néel) carried out the local organization of the conference.
European Physical Society Europhysics Conference on High Energy Physics
EPS-HEP 2009 July 16-22, 2009 Krakow, Poland
Scientific Programme: Standard Model and Beyond QCD and Hadronic Physics Physics at Future Facilities Neutrino Physics Astroparticle Physics Cosmology Non-perturbative Field Theory Flavour Physics and CP Violation Detectors and Data Handling String Theory Heavy Ions Accelerator R&D

This major biennial forum of high energy and particle physics followed the traditions of the series, in particular the successful previous conferences of Tampere (1999), Jerusalem (1997) and Brussels (1995). The conference programme started with three days of presentation of original results in thematic parallel sessions. After a break on 15th of July (the excursion day) it continued with plenary talks summarising the most recent outstanding results and discussing the perspectives of particle physics. See the home page of the Conference for details. Among other information one can find there the Conference Programme and the scanned-in transparencies of the talks.

The conference was organised at the new campus of Roland Estvss University in Budapest and had more than 600 participants mostly from European countries but with significant attendance from North and South America, Asia and Africa as well.

In addition to the scientific programme outstanding scientists were awarded prizes of the European Physical Society: the 2001 High Energy Particle Physics Prize as well as three newly founded awards: the Prize for Young Particle Physicists, the Gribov Medal honouring a young theoretical particle physicist and the Outreach Prize for the best popularisation of particle physics discoveries.

Prof. Donald Perkins (Oxford University) has been awarded the High Energy and Particle Physics Prize of the European Physical Society "For his outstanding contributions to Neutrino Physics and for implementing the use of Neutrinos as a tool to elucidate the Quark Structure on the Nucleon."

The Young Particle Physicist Prize was granted to Dr. Arnulf Quadt (Bonn University) "For his outstanding contribution to the measurement of the F2 Structure Function in Deep Inelastic Scattering and extending its measurement to low values of momentum transfer and fractional momentum x."

The Gribov Medal was given to Prof. Steven S. Gubser (Caltech) "For his outstanding work that has revealed a deep connection between gauge theories and gravitational interactions in the framework of string theories. This made it possible to compute and understand interesting properties of a gauge theory in 3+1 dimensions from a gravitational theory in 4+1 dimensions."

Outreach Prizes were given to Dr. Christine Sutton (Oxford University) and Prof. Erik Johansson (Stockholm University) "For their innovative use of electronic and printed media to bring HEP to wider public, including professional colleagues, students and schools, and in particular their collaboration developing computer interactive packages for educational master classes."

The Local Organizing Committee invited all prize winners to deliver talks during the HEP2001 Conference at a special Prizewinner's Session.