The International Workshop on Cosmic Structure and Evolution took place in Bielefeld, Germany from September 23 - 25, 2009, and was organized by Kari Enqvist, Aravind Natarajan, Patrick Peter, and Dominik Schwarz. The workshop was supported by the Center for Interdisciplinary Research (ZiF), and by the International Graduate School, GRK 881, Bielefeld - Paris,
"Quantum Fields and Strongly Interacting Matter".

The primary focus of the workshop was on discussing new advances in large scale structure and the cosmic microwave background, and consisted of invited lectures by leading researchers, contributed talks, as well as discussion sessions.

Julio Fabris, Vittoria was so kind to jump in on a rather short notice, as Bob Nichol could not make it due to an emergency.

We thank all speakers and participants for their contributions in talks and discussions. We thank Florian Kühnel and the Center Service Media of Bielefeld University for producing video streams of all talks and discussion sessions, which are available at

We thank Gudrun Eickmeyer for the perfect organisation of practical things, including the fantastic conference dinner at the "Glück und Seligkeit". 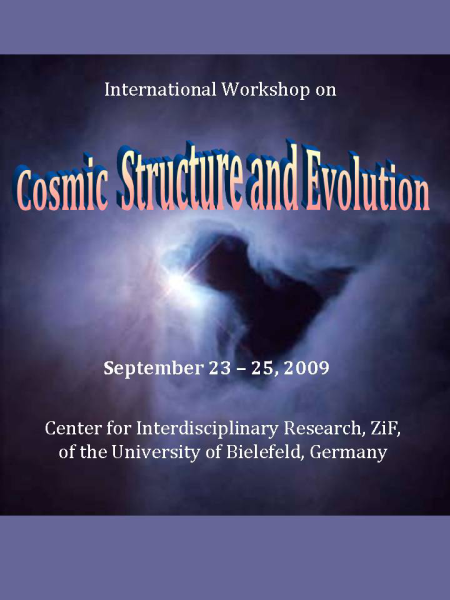