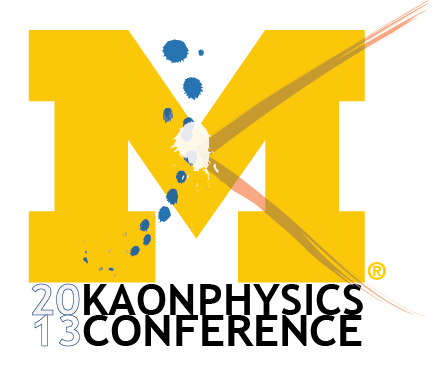 2013 Kaon Physics International Conference
KAON13 Apr 29-30 and May 1st University of Michigan, Ann Arbor, Michigan - USA
This is the latest on a series of conferences aiming at giving a venue to exchange new results and ideas to all people working in the field of kaon physics. The aim of KAON13 is to present new experimental results in kaon production and decays, relevant but not limited to topics like: - C, P and T violation - CKM Matrix and Rare Decays - Lepton Universality - Lattice Gauge Theory - Chiral Perturbation Theory - Implications from B factories and LHC Measurements Developments in experimental and theoretical techniques, as well as advances in accelerators and detectors R&D will also be covered.

The 2007 edition of the Kaon International Conference (KAON’07) was held at the Frascati Laboratory of the National Institute of Nuclear Physics (INFN), Italy, from May 21 to 25, 2007. It was organized by INFN and supported by the universities of Rome, “La Sapienza” and “Roma Tre”.

KAON’07 follows a series of conferences of similar emphasis, formerly held at KEK, in Chicago, in Pisa and most recently at the Northwestern University in Evanston, in June 2005.

The Conference was focused on kaon physics, aiming at a comprehensive discussion on the latest experimental and theoretical achievements, including precision tests of the Standard Model (SM), study of non-perturbative QCD, improvements in CP and CPT tests, development of new projects sensitive to physics beyond the SM.

The Conference attracted 120 participants from all over the world, demonstrating the interest of this field of particle physics.

The Proceedings, providing a scientific record of the topics discussed, collect more than 50 papers, including several reviews on kaon and flavour physics and 30 contributions with the ongoing activities and the recently finalized studies. They cover the determination of the Vud and Vus elements of the CKM matrix, the theory and the measurements of the pion-pion scattering lengths and phases, the tests of Quantum-Mechanics and CPT invariance, and several issues related to lepton universality. The theoretical framework and the challenging experimental projects for the measurement of the ultra-rare kaon decays K→ π v vbar are also discussed. Overall, the KAON’07 Proceedings constitute a rich and coherent summary of the state-of-art researches in kaon physics and explain their potentiality to reach a deeper understanding of the Standard Model and to search for signals of new physics.